Running out of ideas on what to do on Waitangi Day?
Need to occupy a whole family on a public holiday?

Everyone in New Zealand knows that Waitangi day is a date of great importance, but not everyone knows what to do on this day.

We believe we have the answer here at Asylum Paintball, but first lets look at some history (scroll past if you know all that stuff)

New Zealand’s founding document was signed on 6th of February 1840 in a marquee on the grounds of what now known as the Treaty house at Waitangi – a town located in the Bay of Islands.

Prior to 1930’s the celebration of colony founding happened on 29th of January – the day when William Hobson arrived in the Bay of Islands.
However things began to change when Governor-General Lord Bledisloe and his wife bought the run-down property of James Busby’s house, where the treaty was initially signed, house and the grounds were made a public reserve on 6th February 1934, but even then the Waitangi day was still not celebrated annually. In 1940 a 100’s anniversary was commemorated, but due to many factors, including World War II, the ceremony was not that well attended, it was not until 1947 and the help of a Royal Navy when the event became an annual occurrence.

Over the years the dates of celebration and commemoration of treaty signing have underwent quite a few changes, in 1957 Waitangi Day has been promised as a public holiday the Labour Party, but after Labour have won the election they weren’t really interested in creating a new public holiday so the Waitangi Day Act gained life in 1960 allowing for a locality to substitute Waitangi Day as a substitute to an existing public holiday, shorty after in 1963, after a change in government, Waitangi Day was substituted for Auckland Anniversary Day as the provincial holiday in Northland.
In 1973 a “New Zealand Day Act” was passed and it was announced that from 1974 Waitangi Day would be known as New Zealand Day and celebrated as a national day, however in 1975 with election of National Party Government, the day was renamed Waitangi Day in order to reflect the views of the new Prime Minister and the fact that many Māori felt that name “New Zealand Day” have debased the Treaty of Waitangi.

Waitangi Day underwent ‘Mondayisation’ by the means of legislation in 2013, shifting the public holiday to Monday if it falls on the weekend, turning any weekend that Waitangi day falls on into a long weekend.

This year Waitangi day happens to be a Monday, and we still get the pleasure of having a 3 day weekend rather than a typical two day Saturday-Sunday type.

It has been well know that a lot of the New Zealanders these day celebrate the Waitangi Day spending a day on the beach enjoying weather and good old BBQ, that is totally understandable since 6th of February happens to be on the best days of summer. Some say that in 2017 we will see no summer and so far the weather has failed to proof otherwise, and with the recent showers and heavy winds, lets be honest, it is rather hard to enjoy a day out there.

There is also a number of gigs, outdoor concerts and events on the Waitangi Day 2017 as well as a 2017 Waitangi Day celebrations at Okahu Bay, Orakei organised by Ngati Whatua Orakei in conjunction with Auckland Council.

Here at Asylum Paintball – Auckland’s Best Paintball, New Zealand’s Premium Paintball Field, where everyone can play paintball*, we like to stay indoor when the weather is playing silly, so here is what we have to offer: 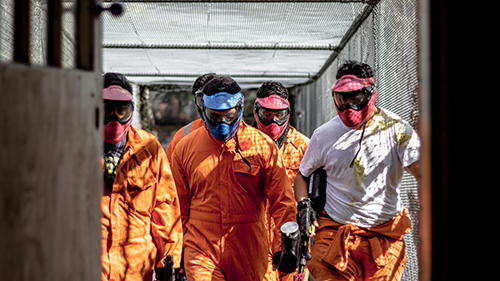